These are the lectures at medical conferences, articles and video tutorials Dr Stoxen has done to help you learn about his approach to examining, treating and preventing foot and ankle conditions.

Dr Stoxen has advised hundreds of top athletes on diet strategies to make weight yet maintain strength, speed and endurance.  His advice has helped many athletes win national and world titles.

He has been invited to lecture as an expert on diet at medical conferences in Madrid Spain, Hongzhou China, Shanghai China, Bangkok Thailand, Melbourne Australia, Kuala Lumpur Malaysia, Tangerang Indonesia, and throughout the United States.

Dr Stoxen was invited as a leading expert to lecture at 1st Anti-Aging International Symposium & Exposition China, Hangzhou, China, 2006 and The International Congress Of Anti-Aging Medicine, Society Of Anti-Aging And Longevity, Madrid, Spain as early as 2006 on the negative effects of inflammatory diets and the link to accelerated aging.

Eat To Win!!! Biochemistry And Biomechanics, The “Inflammation” Link To Accelerated Aging At The International Congress Of Anti-Aging Medicine, Society Of Anti-Aging And Longevity, Madrid, Spain, 2006

Dr Stoxen’s lectures present cutting edge scientific studies that inform doctors on how certain diets can increase levels of inflammation which is linked to diseases of aging such as skin aging, heart disease, stroke, some cancers and mood disorders such as anxiety, depression and accelerated aging.

In 2004, Dr Stoxen pioneered a new drug free treatment approach to reduce mood disorders such as depression by aggressively reducing the levels of inflammation.  There are hundreds of studies published in peer review journals that link inflammation to depression and other mood disorders.

After Dr Stoxen’s approach helped famed Wiggle, Anthony Field recovered from a 20-year battle with clinical depression, he authored the book, How I Got My Wiggle Back. 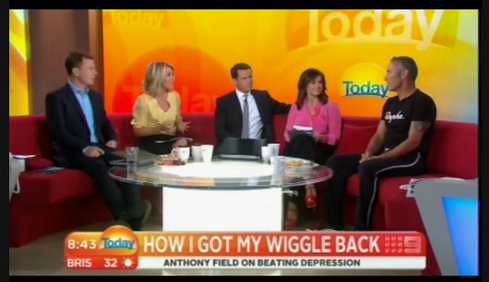 In his first televised interview on the Today Show in Australia he discussed how he was at the brink of suicide just before consulting with Dr Stoxen, backstage at the Allstate Arena in Chicago.  Dr Stoxen gave him a 20+ hour emergency treatment in two days to flush out as much inflammation caused by numerous musculoskeltal complaints and advised Field on the right diet to reduce inflammation.

Field praised Dr Stoxen on the Today show for his drug free approach to disconnect  the inflammation-depression connection that helped Anthony to recover from the brink of suicide to his normal self in a matter of weeks.

This led to medical organizations in Melbourne Australia, Bangkok Thailand, Kuala Lumpur Malaysia and throughout the United States to invite Dr Stoxen to give formal presentations on the science behind this new drug free approach to the treatment of mood disorders at The 6th Annual A5M Conference In Anti-Aging & Aesthetic Medicine in Melbourne, Australia on August 19, 2012

What followed was numerous media covering the story on ABC, CBS, NBC, CNN, FOX, and many other outlets, too many to mention.

If you are from out of the Chicago area and would like a FREE 30 minute strategy meeting with Dr. Stoxen, you can book it here.
Book a Strategy Meeting with Dr Stoxen